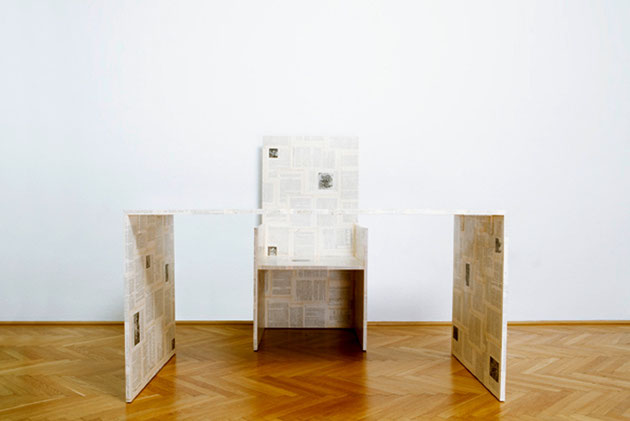 With the chair-installation I create a real and an imaginary space to reflect at present on Käthe Leichters work. I focuse on her scientific work: a table and a chair which have been designed for this early social scientist are covered with the pages of her most important publication, the Handbook of women’s work in Austria, dating from 1930. In fact, one can read in the pioneer studies of the Handbook covering a symbolic university chair, a chair which she never has got.

Part 2: Correspondence to Index of Käthe Leichter's Network of Women

Significantly Käthe Leichter did not work alone: I have listed in a more than 5 meters long work of soft materials the activists of Leichters legendary women network, which have not been studied until now. In the catalogue accompanying this exposition the index of 165 women, which has been defined together with historian Lichtenberger, is published for the first time. 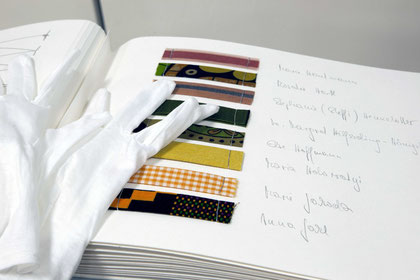 Part 3: Geraldine Forbes, Käthe-Leichter-Guestprofessor, seated at the table and the chair of Le(e.h.)rstuhl.

The third part of the art project consists of photographs: Geraldine Forbes, American Historian and Käthe Leichter Visiting Professor in 2011 in Vienna, is seated at the table and chair of the Le(e.h.)rstuhl. She reads through the pages of the Handbook of Women’s Work, with which the table is covered. In another moment she compares the strips of fabric with names in the legend book, which is also part of the exhibits.

The fact, that all these pieces appear both in the photographs, recording the past, as well as in the show, opens up a dialogue between different layers of time. The intertwining of different meanings and temporal tiers amplifies the process of remembering and creates space for continuously new reflection. 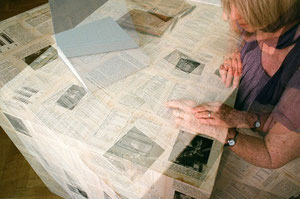 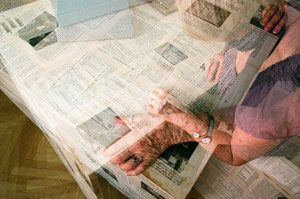 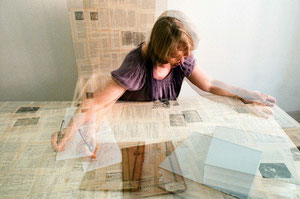 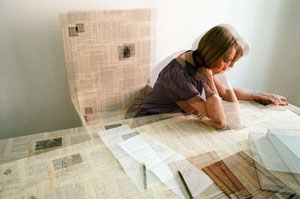 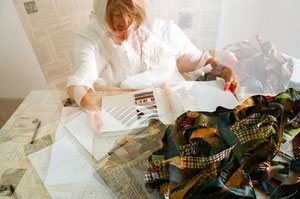 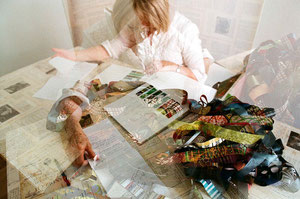 Käthe Leichter’s life and work were brutally ended when she was imprisoned and later murdered under the Nazi regime. This is depicted in a word graphic work, which makes her name (almost) illegible through trimming the letters until it disappears.

In conjunction with the Intakt project Vienna is Female for the 100th International Women’s Day, women from history were commemorated in Semperdepot with flags. The flag with Käthe Leichter’s disappearing name as a public, affirmative sign, reclaimed attention for her in Semperdepot and in other exhibition locations.

Käthe Leichter (born in 1895 in Vienna and murdered in 1942 for being a Jew) was social scientist, socialist, politician for women’s issues and unionist. She was heading the first Office for Women’s Affairs in the Chamber of Labour in Vienna and she was author of pioneer publications in social science.

The rector of Heidelberg University has apologized in 2013 for what he called “the university’s shameful past and the many injustices and unspeakable crimes committed” during the Nazi era and for the fact that Jews and others who had their university titles revoked during the Nazi era were not informed in the decades following World War II that they had been reinstated in 1946.

I am very proud to have contributed to the restitution of her rights and honour with my project.